Stonehenge is one of the most iconic manmade landmarks in Britain. Not only impressive in stature, but age as well.

Firstly, a visit here is not cheap (unless you’re an English Heritage member and then it’s free). Sadly I’m not currently an English Heritage member so it’s probably the most I’ve paid to get into a heritage site in the UK. But I was not disappointed. It was still fairly early morning when we arrived, so we hopped straight onto one of the shuttle buses ferrying visitors up to the site. Travelling through rolling countryside, we rounded a small bend and the stones peeked at us from the top of the very slowly rising mount on which they stand surveying the landscape, pretty much like they have been doing since between 2500 – 2300 BCE. 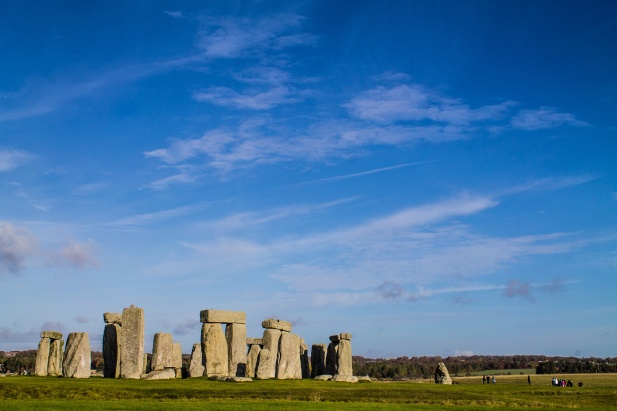 Only when you are alongside the stones do you truly get an idea of the scale of this monument. Yes you can see them from the road as you drive past, yes you can see figures alongside them, but even then the size just does not commute. Not until you are almost next to them that is; the sarsen stones are huge. They tower over the visitors standing alongside them. Now you are no longer permitted to wander between the stones, instead you can do a large circuit of them. Audio tours are available, but I tend to not be a fan of them, instead I was happy to take in the spectacle with the knowledge that I still had the visitor centre to explain finer details, which was good since interpretation panels on the site itself were minimal.

At a cost price of £27 million the long awaited visitor centre for Stonehenge opened in 2013 and was deemed not only “fit for purpose” by the director, but also a piece of artwork. It’s a very clever design, importantly for a building that stands in such a dense concentration of archaeology, it is also completely reversible; it could be dug up, taken apart and built somewhere else.

Since the previous visitor centres had been described by parliamentary committee in 1989 as a “national disgrace”, it didn’t exactly have a hard act to follow. And this building is cleverly concealed from the stones about a mile and a half from where they stand, the grey glass, steel and timber look almost like a densely packed leafless forest supporting a roof. Originally there were some teething problems, with the site not being able to cope with ferrying the amount of people up to the site (the Daily Mail had an article called ‘Moanhenge’, because they are just hilarious). 3 years on the systems in place appear to work seamlessly.

The exhibition in the visitor centre is slick. Since not everyone can visit to see the incredible alignment the stones have to the sun, only visible for the solstice and the equinox, this can be witnessed in the first room that you pass through. Its rounded walls have a computerised 360 degree image of the stones created by detailed laser scanning of the site and have a sped up version of the sunrise at these points in time. It also gives all visitors the perspective from standing inside the stone circle, a pretty special view since this is now not permitted on the site.

The room beyond sets the scene of the site, introducing key exhibition ideas on big panels and then focusing key themes within cases.  The use of tactile models to present the sites development as well as a large screen that portrays how Stonehenge fits within the surrounding landscape, really helps to describe ‘what’, ‘when’, ‘how’ and ‘who’. There is a timeline, with images that place the building of Stonehenge on a timeline that considers events going on in the rest of the world. Some of the items on display are of national importance, possibly none more so that the remains of a man (a label on entering the exhibition indicates there are human remains on display) who predate the stones and was buried in a long barrow nearby. In incredibly preserved condition, his bones stand beside a reconstruction of his face.

‘Why’ is a bit more of a complicated one to explain, since no-one really knows what Stonehenge was used for. There are arguments ranging from ‘a landing site for alien spaceship’ to ‘a massive cemetery site’, some of the more sensible arguments (i.e. not the alien one) are put forward by different archaeologists who have studied the site, which is good as it allows a visitor to develop their own theories from the evidence that has been presented. 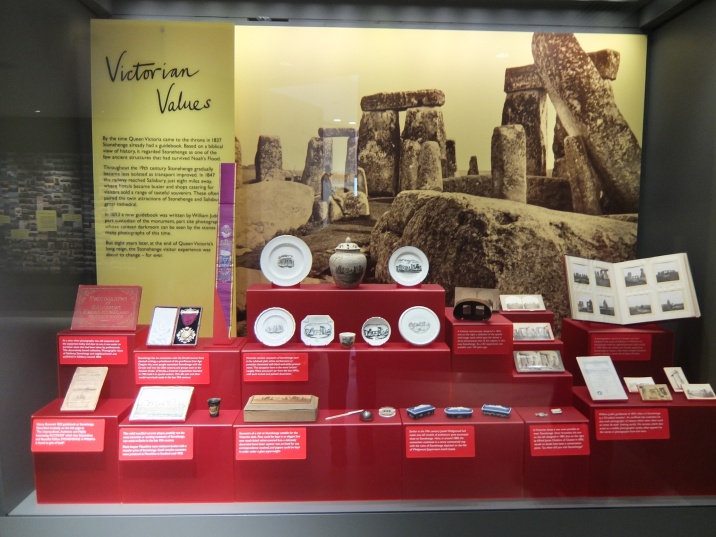 Possibly my favourite part of the exhibition was the one that looked at how Stonehenge has been perceived in more modern times. With examples of postcards and advertising for the site, as well as more unusual items such as a collection of porcelain and Chinese phone-cards. 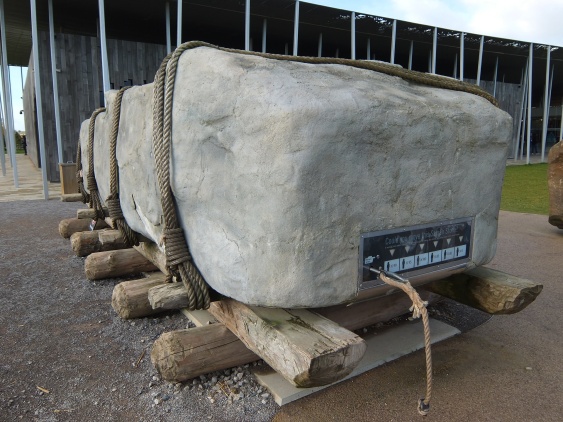 Outside there were examples of wattle and daub huts, with people dressed up that you could chat and engage with. There was also an excellent interactive where you could attempt to putt a sarsen stone and it would tell you how many of you would be needed to move the stone.

Overall I can safety summarise that Stonehenge rocks and if you want to see more photographic evidence have a look at the Nomad’s Scrapbook.